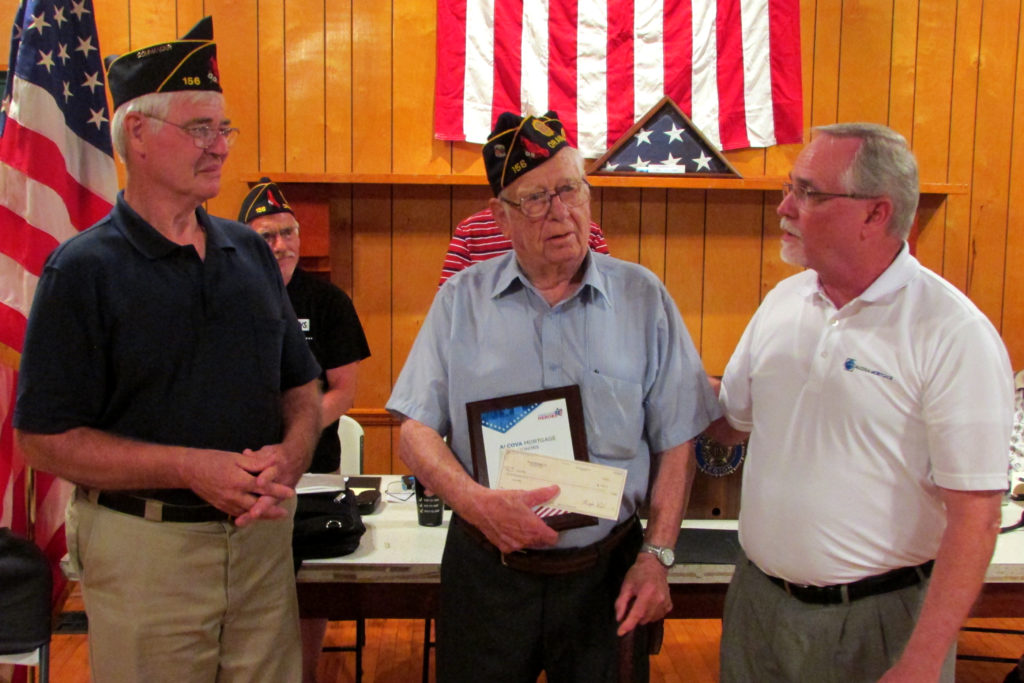 At the young age of 19, Lewis May left his job at Virginia Metal Products in Orange, VA after he was drafted to fight in World War II. He completed his training at Fort Lee near Petersburg, VA, and then departed for Europe on the Queen Mary. After landing on the Allied-controlled Omaha Beach, his battalion was stationed in Belgium at the port in Antwerp. Their ultimate mission was to control and stock the Army’s supply lines through this port.

Attempting to disrupt and destroy this supply line, the Germans constantly bombarded the area with V-1 and V-2 buzz bombs, the combat equivalent of the SCUD missiles used in the early 1990s. These buzz bombs were named for the motor that propels them forward, making a distinct whirring sound.

“If you heard their engines, you knew you were alright,” said May. “It was when you didn’t hear them that you knew you were in trouble.” May also recalled that the Germans dropped a rocket every half an hour during his seven months there. Despite the staggering number of bombs being hurled on Antwerp, there was a much higher number of casualties incurred among civilians rather than the military. “That’s what was so horrific, the high number of civilians killed,” said May.

May’s closest call with the frequent bombing came from a movie he chose not to see with his unit. The film Buffalo Bill was playing, and the theater was directly hit, resulting in over 200 people being killed including seven of May’s friends from his battalion. “Any other day, I would have been there,” said May.

The constant bombardment on Antwerp occurred during the final months of the war, so it wasn’t too long before May found himself back home. “When I came back I was a nervous wreck,” said May. “I guess I didn’t realize how dangerous it was.”

Lewis was later called upon as a reserve during the Korean War, but he spent his tour playing baseball along the eastern seaboard to entertain the troops. After his time ended on the Army’s baseball circuit, May declined an offer from the University of Virginia to play baseball, and he returned to Orange to resume working for Virginia Metal Products. He would retire after career of 32 years with 10 years as a general manager.

Lewis May received his Hometown Hero honor from Branch Manager Greg Dudley on September 21, 2017 at the Orange American Legion Post 156.