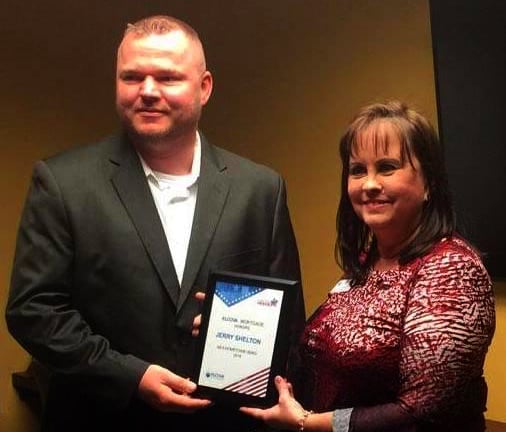 Joining the U.S. Navy in August 1996, Jerry Shelton fell in love with the military soon after completing his first deployment at the young age of 19. “At 19, I would have never thought I would be in France or Spain,” recalls Jerry. “I was seeing the world while doing something that really mattered. By the end of my first deployment, I knew this is what I was going to do with my life.”

Jerry completed his first two deployments on the USS Dwight D. Eisenhowerand USS George Washington.  He later transferred to Lemoore, CA and served a tour along the west coast. His third tour and fourth tours brought him to Virginia Beach aboard the USS Enterprise.

Feeling a strong desire to do something different, Jerry volunteered to go to Iraq. “Of course, everyone thought I was crazy,” said Jerry, but he was determined to go, and he spent the near year in Iraq. Jerry then finished another two deployments on the USS Harry S. Truman.

As Jerry closed in on twenty years with the military, he began to consider what he had accomplished and how he could make a difference that would last. This led Jerry to his final tour as an instructor at CNATTU Lemoore, in Lemoore, CA. “I like to think that I had an impact on the students I taught and knew,” said Jerry. “Hopefully, the students I taught will take the lessons they learned and pass them on to the next generation of young sailors.”

After leaving the military, Jerry began a new fulfilling career doing government contracting at Sonalysts, Inc. “I felt I could use the knowledge and experience that I gained in the past 20 years in the military,” said Jerry. “I could still make a difference in this career while still helping the next generation of sailors and marines.”

Jerry has also committed his time and energy with numerous community involvement programs including the YMCA, Special Olympics, Operation Homefront, Salvation Army, and many others. He is currently looking into other programs that he can help with including Equi-Kids and Equi-Vets, a therapeutic riding program that benefits veterans and special needs children and the Tidewater Wooden Boat Workshop program that has boatbuilding and nautical-related activities to help disadvantaged youth.

In looking back, Jerry has nothing but immense pride in making the decision to serve his country. “I know that if I am ever asked what I have done in my life, I will PROUDLY say I served in the United States Navy.”

Branch Manager Tanya Gills from the Virginia Beach Branch at ALCOVA Mortgage was honored to hear Jerry’s story and present him with his Hometown Hero award in March!