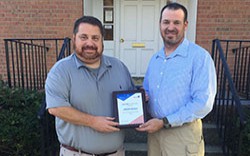 When Staff Sergeant Jason Nicely joined the Army 18 years ago, his grandmother told him “whatever you do, finish it out.”  Not only did Nicely bravely serve our country in the Army and Army Reserves, he earned a Purple Heart in the process.

Nicely was stationed at several bases throughout the United States before being deployed to Iraq on Mother’s Day 2005. He was part of a military transition team sent to train Iraqi soldiers in military tactics.  His goal was to teach them to take back their country.

On October 14, 2005, after one particularly intense night of gun fight, Nicely’s crew went out at daybreak to check the area.  They headed out on a main supply route that was flanked on both sides by canals.  Little did they know that overnight, enemy fighters had planted antitank mines in the narrow strip of road.  As he drove over the area, the mine was detonated and took off the back end of the truck.  His gunner was ejected out of the hatch and rolled onto the hood. Nicely suffered with a concussion, a broken back, dislocated ankle and shrapnel in his arm.  While everyone in the vehicle was hurt, miraculously, they all survived. “If it had detonated just a little early, I wouldn’t be here telling this story,” said Nicely.

For his service, Nicely was recognized with the Purple Heart, which is awarded to members of the armed forces wounded by an instrument of war in the hands of the enemy. While he was honored to be recognized, Nicely said he was proud just to fight for all those who can’t. Nicely said, “I’ve got so much from the Army and Army Reserves.  I got to go a lot of places, and I learned trades like welding and marksmanship. I now have thousands of brothers and sisters all over the world.”

For his outstanding service and to commemorate the 11th anniversary of his survival from the antitank mine, we award Staff Sergeant Jason Nicely with the Hometown Heroes award.