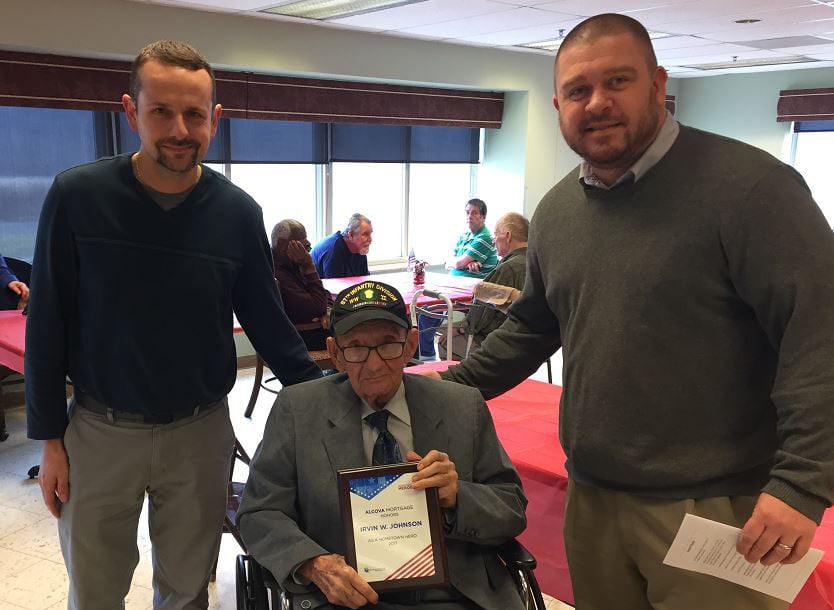 In 1943, Irvin W. “Butch” Johnson was an 18-year-old senior at Fort Hill High School who found himself newly drafted and packing his bags for U.S. Army basic training. Assigned to the 87th Infantry Division, Johnson shipped off to Europe and was assigned to General George S. Patton’s army in November 1944.

While engaged in fighting pockets of German resistance across France, Johnson and the 87th soon found themselves engaged in heavy combat near the French-German border town of Rimling. Fighting continued for the better part of two weeks, and conditions were rough with soldiers enduring freezing temperatures in the snow and mud. Decades later, Irvin would lose both legs below the knees due to complications from the frostbite that he suffered from in France.

Johnson saw intense action at the Battle of Bulge and afterwards was promoted to Staff-Sergeant. He received orders to lead his men near the German border town of Kobscheid where his squad was pinned down by an entrenched German machine gun nest. Ordered to take the bunker, Irvin directed his men to provide covering fire while he fought his way up the hill and climbed on top of a concrete pill box. As Irvin crawled up to the edge of the bunker, he spotted a German firing down at his men below. Thinking quickly, he pulled the pin on a hand grenade, counted to two, and dropped it inside. Within minutes, a German lieutenant came out and surrendered.

Johnson learned soon after that he would receive a Silver Star for his actions that day. “I’d gotten shot by a sniper in Germany later that month,” Johnson recalled, “and they sent me back to Paris. And then one day, I was lying there in bed and a colonel comes by and pins this thing to my pajamas and tells me he doesn’t have the paperwork for it.” The war ended soon after, and Johnson received his discharge papers in November 1945. He travelled back home to Cumberland and began working for Sterling Electric, wiring commercial buildings and schools and responding to residential service calls.

But on October 4, 2015, he was finally presented with his Silver Star after seventy years of waiting. Retired Air Force Lt. Col. Bill Emmer became a close friend of Irvin, and he made it his goal to get Johnson his medal.   “When I heard the story about the officer pinning Butch’s medal to his pajamas, I knew I had to get him the recognition he’d earned,” Emmer said.

Irvin became something of a local celebrity around his Western Maryland hometown for his WWII service, and Oct. 4, 2015 was officially declared “Butch Johnson Day” in the city of Cumberland. A month later, around Veterans Day, Johnson found himself in Cumberland’s spotlight again. He was invited to his local high school for a lunchtime assembly and honored in front of 12,000 people at the beginning of the school’s annual homecoming football game.

Johnson would receive another major honor in July 2016, receiving the rank of Chevalier (Knight) in the National Order of the Legion of Honor by France. Established to recognize those that helped the people of France gain their freedom in 1944, this award is the most prestigious honor that can be bestowed upon a non-citizen of the French government.

Even with all the medals and community honors, recognition for a job well done was never the point for Johnson. “I got called on to serve my country, and I did it,” he said. “Then I came back and I got on with my life. That life has been a pretty good one, too.”