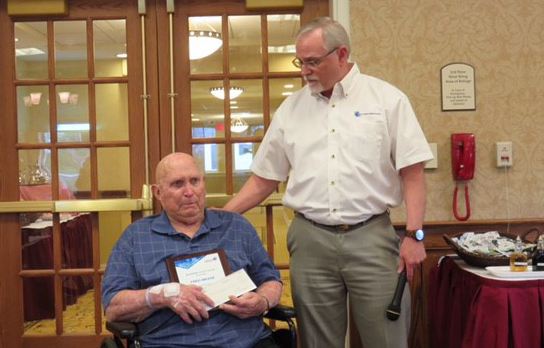 A native of Mount Vernon, VA, Fred Wease grew up in Northern Virginia. He later witnessed the difficult times of the Great Depression, resulting in his family moving to Fairfax County.

America’s entry into World War II brought on the draft, and on May 11, 1943, Fred was drafted into the Army. His required training sent him to Richmond, VA and Shelby, Mississippi to learn the necessary skills to be a 2nd Gunner and Ammunition Carrier.

In 1944, as part of the 69th Infantry, Fred was shipped over to Normandy, France and joined in an intense attack against the German Army. Serving as an Ammunition Carrier, Fred provided support to a machine gunner. In an intense fight, a sniper bullet took out the machine gunner, forcing Fred to take over this role.

A later battle brought another unfortunate outcome for Fred and his fellow soldiers. They were separated from their platoon and captured by the Germans. Taken as prisoners of war, they were escorted to an old barn where 150 other soldiers were being held. Cramped and cold conditions and no food or water made for difficult days for Fred and the other soldiers. Days later, they were loaded onto railway box cars and taken to prisoner camp called Starlock 4B.

As a POW, Fred worked in a local steel mill in Dresden, Germany. For six months, Fred lived in the prison camp and suffered from malnutrition. He ultimately lost 25 pounds and much of his hair during his imprisonment.

In May 1945, Fred’s time as a POW finally ended after prison guards marched him and his fellow solidiers down a road and left them. On July  6, 1945, Fred returned home and received an honorable discharge from the United States Army. In honor of his service as a soldier and POW, Fred received the Bronze Star, Purple Heart, and the Prisoner of War Medal, his most valued medal.

Fred continues to share his stories with the residents at Dogwood Village Senior Living and looks forward to participating in many activities such as bingo, parties, and musical events.

On April 26, 2017, Branch Manager Greg Dudley from the ALCOVA Branch in Gordonsville, VA presented Fred with his Hometown Hero award. Staff from Dogwood Village Senior Living coordinated the event and were on hand to celebrate with Fred!