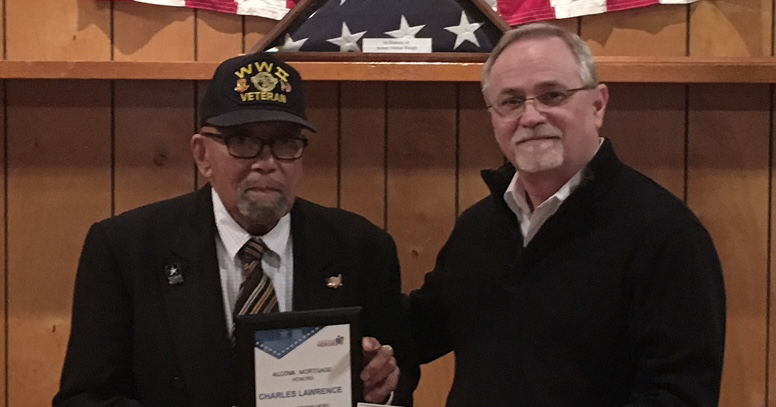 Born in 1924 on a family farm in Gordonsville, VA, Charles Lawrence aspired to join the military and see the world at an early age. At 15 years old, Charles and his friends signed up to join the military. However, when Charles’ mother found out, she ran to the Louisa County courthouse carrying Charles’ birth certificate to prove he was too young to go to the military. At age 18, before Charles could finish and graduate high school, he was drafted into the U.S. Army, and he trained at Fort Battalion as a Wench Operator for a ship.

In March 1944, Charles was shipped to New Jersey to board the Queen Mary. World War II was raging on, and Allied forces were in the process of liberating France. With enemy troops scattered across Europe, Charles and his unit were assigned military police duty to keep the public safe by guarding hotels, roads, and surrounding areas. WWII ended in 1945, and Charles came home to attend the Engineer School at Fort Belvoir, VA.

In 1950, after completing the engineer program, Charles found himself on his way to complete another tour in Korea. North Korea had crossed the 38th Parallel Line, and with the aid of China, had pushed South Korean forces down to Taegu, the lower south portion of Korea. Charles, now part of the First Calvary Eighth Combat Engineers was sent there to build bridges, lay mines, make escape routes, and keep the enemy from advancing. The engineers crossed mountains to reach the Parallel Line and placed mines just above the line. When the enemy got close, the artillery unit would shoot the mines to stop the North Korean pursuers. Ultimately, North Korea ceased fire.

Charles retired from his military career in 1953 and made his family home in Arlington, VA. He had completed two tours of duty in ten years of service traveling to Europe twice, Belgium, Germany, Korea, and Japan. He would later work as a Smithsonian Institute Special Policeman, a produce manager, a manager for two stores, and an owner of a cleaning business.

In 2003, Charles returned to Gordonsville. Twice widowed, he married Ann Jones Lawrence, the pastor of Zion Grove Baptist Church in New Canton, VA. Having a passion to serve others, Charles has served as a missionary at Zion Grove Baptist Church and Love Outreach Ministry in Gordonsville. He has taken people to appointments or to work, delivered food packages to the needy, and even cleaned a local church.

Branch Manager Greg Dudley from our Gordonsville Branch was honored to present Charles with his Hometown Hero award.