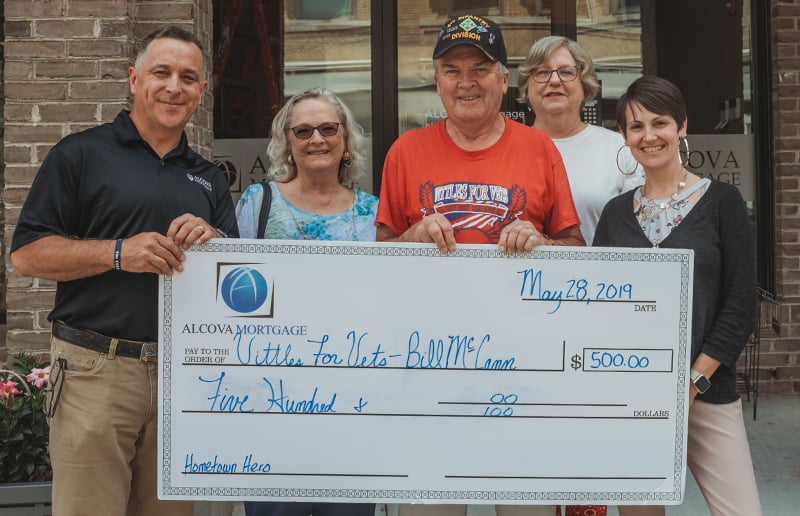 Raised in the small town of Cumberland, Rhode Island, Bill was drafted in 1965 shortly after his high school graduation. He trained at Fort Lewis in Washington state as a member of the 4th Infantry Division. After shipping out to Vietnam in 1966, he returned home after one year of service with military honors including a Combat Infantry Badge and a Purple Heart.

After owning and operating a small construction company for 35 years, Bill retired and founded the Vittles for Vets charity in 2014 in his home state of Rhode Island. He later moved to Radford, VA in 2015 to start a chapter serving Southwest Virginia and beyond.

“What we do is we issue $50 food gift cards to veterans who qualify for the program…to qualify, you must be other than dishonorably discharged, you must be alcohol and drug-free, and you must be living at or below federal guidelines for poverty,” says Bill.

Giving out these gift cards to veterans stemmed from a conversation with a homeless vet back in 2014.

“I took him to lunch in the cafeteria at the VA, gave him a $50 gift card to a supermarket and this big guy grabbed my hand and started crying and that was the very second Vittles for Vets was born,” McCann said.

His charity now serves 67 veterans and their families which is up from 26 veterans in April 2018.  Their overhead runs around 4 percent, with 96 percent used for the purchase of gift food cards for the Vittles veterans. Vittles distributes weekly grocery gift cards to those in the program, and veterans are required to mail in a grocery receipt to ensure the card is not used for alcohol, tobacco or junk food.

Besides meeting physical needs, McCann has discovered how the program has meant so much more to the veterans he has helped. He recalls meeting with the family of a veteran that benefited from his charity while attending the veteran’s funeral.

“When I went to the wake and the funeral, his brother and sister came up to me at separate times and told me that Roger was in a deep state of depression and once he was accepted into the Vittles for Vets program, emotionally he started to get better. He was just happy to be a part of it, and I never realized the emotional value Vittles has as well as the nutritional value.”

McCann hopes to see Vittles for Vets grow even more this year with the goal of giving 70 veterans gift cards on a weekly basis.

In addition to being honored by ALCOVA Mortgage as a 2019 Hometown Hero, Bill was also recently honored in the Roanoke Valley with the 2019 Red Cross Military Hero Award. Branch Manager Jonathan Sweat and the Legacy Team from our Roanoke branch were honored to present Bill with his Hometown Hero award while also treating him and his wife Sandra to a delicious lunch. As part of his Hometown Hero award, Bill was presented with a $500 check which he requested to go towards Vittles for Vets.