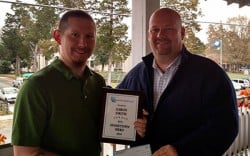 Aaron joined the Navy in October of 2001. His first duty station was alongside the Marine Corps Base, Camp Lejeune with the 3rd battalion 2nd Marines. In 2003, Aaron was deployed to Iraq in the initial invasion.

Upon his return, he was stationed at Camp Lejeune until 2004 at which point he was moved to the Naval Nuclear Power Training Command in Charleston, South Carolina. While there, he was deployed to Afghanistan from December of 2006 through July of 2007. Upon his return from that tour, he returned to finish his time at the Nuclear Power School. While preparing to deploy to Iraq for a second time, they discovered he was no longer deployable for medical reasons. He was medically retired from the Navy in November of 2010.

Aaron, we are so very grateful for your service and sacrifice to your country, your fellow man, and helping to secure the Freedom we all enjoy in this country. You are our Hometown Hero!

Tony Markland, Branch Partner of ALCOVA’s Powhatan branch, had the honor of meeting Aaron and presenting him with his plaque and $500 check.