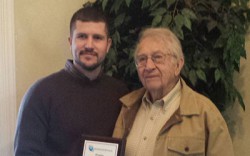 S. Sgt. Zane Turner was drafted into the US Army on October 3, 1942 at the age of 21. Assigned to General George Patton’s 3rd Army, 80th Infantry division, Mr. Turner was a section leader, Machine Gun Heavy operator. The early years of Mr. Turners campaign for our country was spent in training camps across the United States. His initial basic training was completed at Camp Forest, TN, and from there he was transferred to Camp Phillips, KS. After a brief stint at Camp Phillips, he was moved to Camp Laguna, AZ to practice maneuvers in preparation for the war.

Shortly after June 6, 1944 (D-Day), S. Sgt Turner received his call to action. For the next year, he would participate in many notable battles in WWII, with the most well-known being the Battle of the Bulge. On March 28, 1945, S. Sgt Turner and his troops were involved in the Rhineland Campaign. While rowing their boat across the river, heavy German artillery began to descend on the troops. Although he was wounded by the German machine guns, S. Sgt. Turner reached the East bank, reorganized his section, and with disregard for his wounds, made a reconnaissance to determine positions for his weapons before submitting to aid and evacuation. That persistence earned him a Silver Star, which is the 3rd highest decoration for Valor awarded to members of the Armed forces, which is awarded for Gallantry in action against an enemy of the United States.

In total, S. Sgt Turner received the following awards for his duty to our Country.

Mr. Turner, we are forever thankful to the men and women of our Armed Forces that are willing to sacrifice everything for our country. ALCOVA Mortgage and all of its employees would not be able to do what we do today if it wasn’t for your service to our great country. You are a real life example of an American Hero.

Brandon Nicely, Branch Partner of ALCOVA’S Blacksburg Branch, had the honor of presenting Mr. Turner with a personalized plaque and a $500 check.