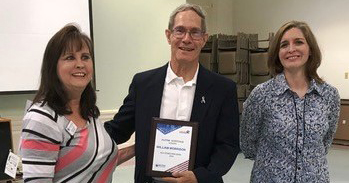 William “Skip” Morrison owes a lot to his father, whose service as a Navy Hospital Corpsman in World War II inspired him to think about joining the military. “He instilled in me a love for our country and our military, and his service took our family to different east coast naval stations and bases.” After spending two summers in Annapolis, William decided to apply for the Naval Academy and graduated in June 1973.

William served as a Surface Warfare Officer for twenty-two years, retiring in 1995. He served in the Engineering, Operations and Weapons Departments as well as an Executive Officer, and he was part of two full deployments in the Pacific and two partial deployments to the Mediterranean. Shore tours included recruiting duty, Naval Postgraduate School for a M.S. in Systems Technology, the Joint Staff in the Pentagon, and the Operational Test and Evaluation Force. He retired as a Commander, 0-5, and his military honors included the Defense Meritorious Service Medal, two Meritorious Service Medals, Navy Commendation Medal, Joint Meritorious Unit Award, and Navy Meritorious Unit Award.

In his last two years in the Navy, he took classes through the ODU Military Career Transition Program to become a certified middle school math teacher. With teaching positions being scarce in VA Beach, Williams took on an opportunity to apply to the Joint Training Analysis and Simulation Center in Suffolk to assist with a joint military training exercise as a model operator. Shortly afterwards, he accepted an offer to become a defense contractor with TRW until they were bought out by Northrop Grumman in 2004. “It was challenging, fulfilling work and I traveled to England, Greece, Turkey, Japan, Thailand, and South Korea to conduct testing and training for a variety of military joint training exercises and some humanitarian assistance training exercises,” recalls William. After almost twenty-one years, William finally retired.

In his community, William and his wife have been members at Galilee Episcopal Church for seventeen years and member of the Outreach Committee for twelve years. He also became a member of the church’s prayer team and participated in formal training to be a prayer team partner after communion and for the monthly healing prayer service. William also volunteers to be a prayer team partner for the annual 3-day Welcome Home Initiative seminars that his prayer team conducts to help veterans suffering from post-traumatic stress. He also volunteers with the Combat Stress Recovery program that started in January 2016, and he assisted in exporting that program to his local Norfolk American Legion Post. In addition to serving his church, William and his wife mentored as at-risk girl for six years while also assisting the girl’s mother.