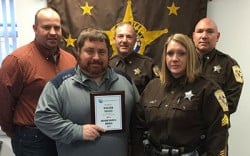 Walter served our country in the US Army from 1984 until 1988. After discharging from the military, he continued public service for the next 28 years in law enforcement. Walter served with the Clifton Forge Police Department where he rose to the rank of Sargeant, and later with the Alleghany County Sheriff’s Department where he achieved the rank of Captain and Patrol Commander. Walter volunteered as a coach and board member with the Clifton Forge Little League for many years, and dedicated countless hours to the youth of Alleghany County. Walter was respected in the community by all that he encountered. Walter passed away on 9/28/2015 from complications from open heart surgery. Walter was just three months from being eligible to retire. He leaves behind his wife, Amanda, and 5 children.