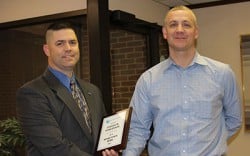 I joined the US Marine Corps Delayed Entry Program in June 1989.  Upon graduation from Hargrave Military Academy in June 1990, I attended Marine Corps basic training at MCRD Parris Island, South Carolina for 13 weeks of recruit training.  After graduating on August 31, 1990, I then attended four weeks of Marine Combat training at Camp Lejeune, North Carolina and was transferred to the school of Infantry for eight weeks of basic rifleman training. I graduated as the company honor graduate and meritoriously promoted to Lance Corporal.

After graduating from the school of Infantry in November 1990, I was selected for duty at Marine Barracks 8th and I in Washington DC.  While serving in a light infantry platoon, I was selected to attend training and tryouts for the Marine Corps silent drill team. After four months of training and successful tryout, I was selected for the team.  My duties while at Marine Barracks 8th and I were silent drill team, White House ceremonial platoon and squad leader of a rifle squad.  During my tour of duty, I was promoted to the rank of corporal.

After leaving the Marine Corps, I held various jobs from laying bricks to fireproofing on commercial buildings where I was a foreman.  I began a career in Communications with Computer Telephone Technologies in Mechanicsville, VA, where I learned how to install voice and data cabling ranging from copper based applications to fiber applications.   This trade eventually connected me with the Law Firm of Hunton and Williams in Richmond, VA.  I worked for Hunton and Williams from 2000 until 2005 in the Telecommunications department that monitored and supported 17 offices from New York to Miami and also international offices in Poland, London, Bangkok and Brussels Belgium.

After the attacks on September 11, 2001, I felt a draw back towards the Military and began to closely monitor the efforts in Afghanistan and eventually in Iraq.  On January 17, 2005, a fellow classmate and brother Marine from Hargrave Military Academy was Killed in Action in Ramadi, Iraq.  Two months later my mother passed away.  The day after my mother’s funeral I joined the VA National Guard and was assigned as a team leader in a rifle company in the famous 29th Infantry Division 3rd BN 116th Infantry, the same unit that landed at Normandy in 1944.  After serving sixty days during Hurricane Katrina in Mississippi and then in Louisiana I was assigned to the 28th Infantry of Pennsylvania National Guard and was deployed to Ramadi ,Iraq in January of 2006 where I was selected to serve with a Military Transition Team (MTT) consisting of 22 soldiers and Marines where our mission was to train, mentor and fight alongside the New Iraqi army.  During my deployment, I was awarded the Combat Infantryman’s badge, Army Commendation with Valor device and the Naval Unit Commendation and Iraqi campaign medal with one campaign star.

Upon returning home in late June of 2006, I was re-assigned back the 116th and resumed my duties as a team leader and later taking over a weapons section.  I was informed my Battalion was being mobilized for the surge in Iraq and we began our pre-deployment training in September of 2006.

I deployed in May of 2007 and was assigned to the 18th Airborne and later 101st Airborne where our Rifle Company was the mounted patrol and escort for the 101st and 18th Airborne in Ramadi Iraq.  I was submitted for the Bronze star medal and was later awarded the Army Commendation (3rd award), the Army Achievement Medal, and another campaign star.

In 2009 my unit was assigned for security around the Washington DC area for the Presidential inauguration of President Obama.

After a serving a little over six years in the Army I was discharged with an Honorable discharge. My total military service completed was 14 years.

In December 2009 I was hired with the Hanover County Sheriff’s Office and upon completion of a 21 week academy and three months of field training I was assigned to the patrol division where I served one year on evening shift and since September of 2011 I have been assigned to Midnight shift. In March of 2012 I completed try outs for the High Risk Entry Team (HRET) and became a member of the team.  The following year I completed the basic SWAT school and attended a field forensic tech school.  In May of 2014 I attended FTO (Field Training Officer School) and completed a basic SWAT sniper school in September of 2014.

I am married to the former Donna Renee Ayers of Montpelier, VA.  We have two girls and live in the Western Hanover County.

My military decorations include:

Six unit awards between the Marine Corps and Army:

Steven, we are so very grateful for your service and sacrifice to your country, your fellow man, and helping to secure the Freedom we all enjoy in this country. You are our Hometown Hero!

Eric Craig, Branch Partner of ALCOVA’s Richmond branch, had the honor of meeting Steven and presenting him with his plaque and $500 check.