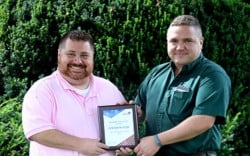 Steven joined the United States Army in February, 1999. He completed basic training in Fort Jackson, SC on May 6, 1999 with the 4th Training Brigade Delta company 1st Battalion 34th Infantry Regiment for 11 weeks. He was then sent to Red Stone Arsenal in Alabama for advanced individual training on May 7, 1999.  He went for the classification of 55B10, explosives and ordnance. He graduated an honor graduate from Red Stone Arsenal in July 1999. He then reported to 811ODCO ordnance battalion in Rainelle, WV in July of 1999. In April 2000, he was reassigned to the Independent Ready Reserve by the United States Army Aviation and Missile Command. He stayed there until Christmas 2005. He then received a Western Union telegram stating he was to return to active duty and to report to Sand Hill Fort Benning, GA by January 22, 2006 for the purpose of Mobilization Operation Iraqi Freedom. He returned to Red Stone Arsenal on February 6, 2006 to be recertified on secret and top secret clearances and to reclass to 89B10. On February 26, 2006 he went to Fort Hood, TX reporting to the 449 CS BN DIV AVN SPT 36th ID/36th CAB. On August 21, 2006 he was deployed to Operation Iraqi Freedom. He spent 18 months in Iraq and returned to Fort Hood, TX on June 17, 2007. He was then honorably discharged on June 27, 2007 with DD214 with the rank of E5, Sergeant.

Upon Steven’s return, he went back to his employment at Motion Industries, where he has been employed for 14 years. Steven is married to the former, Sarah Lorain Quinlin. They have one son together and live in Alleghany County.