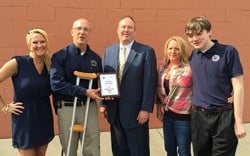 Steve Cantell served twenty years in the United States Army from 1981 to 2001.  He was enlisted as an aircraft mechanic on the Chinook Cargo Helicopter. He was stationed across the United States at various Army Bases while recruiting for the unit.  He spent three years in Germany and held the rank of First Sergeant E8.  His final assignment was at Fort Knox where he was in charge of a team that investigated alleged improprieties against Army Recruiters.

In 2002 after his last assignment, Steve Cantell became a Police Officer for the Cobb County Police Department. He was a patrol officer at Precinct 1 for eight years and then was promoted to the Internal Affairs Unit in 2010 as a background investigator.

Steve Cantell has lived all his life serving his country and his community.  He is a staple in the community and his love for serving others makes him our “Hometown Hero”.

We thank Mr. Cantrell for his dedication and loyal service!

The entire police Internal Affairs unit including the Director, Captains, Chief and Sergeants along with his family came out to support us in honoring Steve Cantell as our hometown hero!  Barbie Brown, ALCOVA’s Southeast Sales Recruiter/Manager, had the honor of presenting Mr. Cantrell with a personalized plaque and a $500 check.