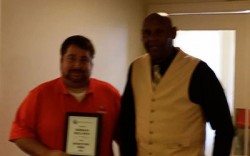 Mr. Holloway has been a resident of Covington, VA for most of his life. He attended Covington public schools and Maryland State College. He was drafted into the U.S. Army in 1966 with a tour of duty in Vietnam. Since his return from Vietnam, Mr. Holloway has suffered from PTSD, had knee surgery, a hip replacement, a second hip replacement (same hip!), poor circulation causing the loss of his big toe, surgery to insert a plastic vein in his leg, below the knee amputation eventually resulting in an above knew amputation, has had a heart attach and in 2013 was diagnosed with cancer! All of these health problems are suspected to be caused from his exposure to Agent Orange in Vietnam. A man of great faith, Mr. Holloway says “Through all of this, I have been blessed by God to make it through each of my tests.”

Mr. Holloway is a member of the Concerned Christian Baptist Church where he serves as Chairman of the Board of Deacons. His is also a member of the W.O. Hickman Choir, a member of the Mens Fellowship, Commander of the VFW Post 1033, a volunteer for Meals on Wheels, and a bell ringer for the Salvation Army during Christmas. He is married to Brenda Mack (Holloway), has 6 adult children, 11 grandchildren and 3 great grandchildren.

Because of Mr. Holloway’s giving spirit and persistence to beat all odds, we are proud to present him with the Hometown Hero plaque along with a $500 check.

Congratulations Sherman Nataniel Holloway, Sr.!!! Thank You for your sacrifices and service to our nation!