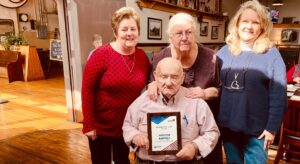 Veteran Preston Barfield joined the Navy to go out and see more of the world. After his time in the Navy came to an end, his civilian job would eventually lead him to meeting his wife Phyllis. Over the many years of their happy marriage Preston and Phyllis took in numerous foster children to help them find their way in life.

Preston wanted to leave his hometown to experience all that life has to offer. He did not want to remain where he was because he knew that there was so much out there to see. He joined the Navy and served in the Cuban Missile Crisis.

After leaving the military, Preston began working at the Department of Correction in Florida. He worked one-on-one with inmates on their work-release program. He helped prepare them for their life outside of the correctional facility to become law-abiding, productive members of society.

One night while on the job Preston was chasing an escaped inmate through the night. Afterwards he sat down at a local breakfast restaurant where he met his wife. Not long after meeting, they got married and began their lives together.

Over a 10 to 12-year period Preston and his wife took in 36 foster children. They provided the children a warm home, food, family, and support.