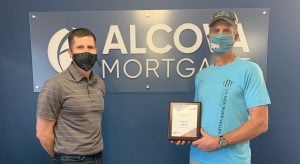 Paul Mele’s service in the US Army recently concluded as he celebrated his retirement in April 2021. His thirty years of service to our country not only left a mark on him personally, but also inspired him to help his neighbors and community through the New River Valley Virginia Chapter of Sleep in Heavenly Peace (SHP) and Rotary International.

Paul was born and raised in the Washington DC area, and in 1989 he received his Army commission as a Second Lieutenant through ROTC at the Virginia Military Institute before attending Virginia Tech for graduate school. His service in the Army was concentrated in the Aviation field where he served soldiers through leadership positions at multiple levels.

Recently, Paul has kicked off his life in retirement, but just because he is retired does not mean he has nothing to do! Knowing that his retirement from the US Army was coming in April 2021, he was searching for a way to serve his retirement community. Paul quickly found his hands full when he joined Rotary International and founded the New River Valley Virginia Chapter of Sleep in Heavenly Peace.

Rotary International is a community of over 35,000 clubs that act on issues including promoting peace, fighting disease and growing local economies. Sleep in Heavenly Peace is a nationwide non-profit that provides hand-built, sleep-ready twin beds to kids in need. Paul is passionate about getting kids off the floor and into a bed of their own. You can check out Paul’s New River Valley Virginia chapter of Sleep in Heavenly Peace on Facebook @SHPNewriver, or shpbeds.org.

Paul is still figuring out retirement life, but the organizations he is involved in as well as Blacksburg Highschool sport and leader development work have been keeping him busy and hustling through his first weeks of retirement! In his free time, you can find him and his wife Julie at Blacksburg Baptist Church, in the great outdoors and on their hunt to find the perfect diner!

Branch Partner Brandon Nicely from our ALCOVA Blacksburg branch was honored to present Paul with his Hometown Hero award.