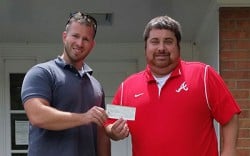 In 2005, after attending just one year of Dabney S. Lancaster Community College, I joined the United States Marine Corps. After completing a 13 week basic training program at MCRD Paris Island in South Carolina, I was tasked with completing a combat training program located at Camp Geiger, North Carolina. Soon after, I attended another 13 weeks of Military Police training in Missouri.

After returning to Camp Lejeune in 2006, I was selected to attend Protective Services Training. This training specialized participants in protective services tactics and anti-ambush operations. After additional training I fulfilled a Combat Marksmanship Instructor billet until our unit was asked to complete a second tour. In late 2006 we began assembling and training for what would be my second and final deployment.

In early 2007 we arrived in Fallujah Iraq, and again successfully navigated the urban environments while providing convoy and EOD security, security patrols, and foot patrols.  In 2010 I chose to allow my active duty contract to expire and focus on the safer career of raising a family and finishing a degree alongside my wife, one of ALCOVA’s own.

After eight total years of service I have never once regretted stepping on Paris Island’s notorious yellow footprints. The people no, Marines, I had the opportunity to meet and share experiences with will benefit my life eternally. But as honored as I am to receive this award, it belongs more to those who made the ultimate sacrifice for their family, for our safety, and for our nation. May they and their family’s sacrifice never be forgotten!