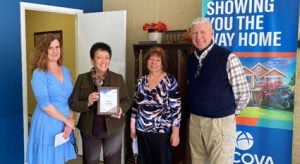 Graduating from the University of Northern Colorado in 1967, Lori joined the Marine Corps as a Second Lieutenant right out of college. She began her military career out of a personal desire to serve and give back to a country that provided so much for her and her family. After serving for twenty-six years, she retired as a Colonel. During her time in the Marine Corps, she met her husband of fifty-one years, Woody Sadler (pictured), who also retired as a Colonel after twenty-eight years of service.

“Service was something my siblings and I were blessed with by the example set by our parents who helped their community, their family and friends, and strangers in need. My parents didn’t have a lot of money, but what they did have, they shared freely,” says Lori.

Lori’s duties and responsibilities in the Marine Corps made a lasting impact on her, and she describes them to be both “plentiful and memorable.” She served at the Women Officers School in Quantico, VA and at the Basic School as an Instructor and Platoon Commander. In these roles, she was tasked to “take civilians and create Marines.” Additionally, she served in Hawaii at FMF Pac, Okinawa Japan, Headquarters Marine Corps in the DC area, The Defense Intelligence Agency, and Camp Lejeune, NC.

After retirement from the Marine Corps, Lori became a realtor in Lexington, VA. It was a perfect fit as it allowed her the opportunity to meet people, make lasting friendships, and serve her community by providing professional advice and helping people find their dream homes.

Outside of her professional career, Lori serves her community in a multitude of ways through many different organizations in the area including: Hospice, Women’s Club, VMI Women’s Club, and Rotary Club. In her time with Rotary Club, she has given globes to third graders, provided books to elementary school children, and cleaned the byways. Her Rotary Club also sponsors the annual hot air balloon rally from Balloons Over Rockbridge in Lexington, VA which serves as a fundraiser for local charities.

Lori has a huge heart and spends an immense amount of time and energy to help the poor and elderly in her community by providing wheelchairs, clean water, micro loans, and more to those in need.

Lori has been a pioneer her entire life. She is a first-generation college graduate, and she started her military career in a field with very few young women. When others ran away from a challenge, Lori took it head on and enjoyed the test. In 1999, Lori was named an Honored Alumni from her Alma Matter and was referred to as a “trailblazer.”

Branch Manager Sarah Dudley from our ALCOVA Lexington, VA branch was honored to present Lori with her Hometown Hero award.