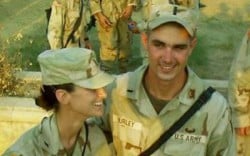 This marks the first time the award is made posthumously. A longtime friend of the ALCOVA family and a classmate of its founders, Bobby Nicely, Bill Siple and Rob Lindstrom, Joshua was best remembered for his devotion to his friends, family and community. He is pictured here in November, 2003 with his wife Teresa.

In a ceremony at Sharon Elementary on September 2nd, the founders of ALCOVA Mortgage gave a $500 donation to the school in memory of Joshua. The Hometown Heroes plaque will be displayed at the school as requested by Joshua’s parents. The school ceremony included the Pledge of Allegiance and a moment of silence. In addition, Joshua’s parents shared how much the school meant to him. Joshua Hurley exemplifies the characteristics of what our Hometown Hero program embodies. He is sorely missed by all that knew him, but uniquely appreciated by all of us here at ALCOVA Mortgage.