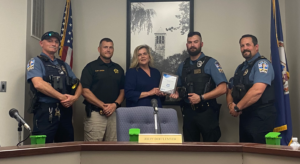 With aspirations to join the Marines after the tragic events on September 11th, 2001 Veteran Josh Kopp enlisted in 2007 at the age of 19. He was deployed a year after his enlistment and served in both Iraq and Afghanistan. The beginning of his civilian life didn’t start as planned and he soon thereafter became a police officer and has accumulated many specialized training accomplishments over the years of his career.

Growing up Josh knew that he wanted to be one of three things: a marine, a police officer, or a history teacher. After watching the tragic events on September 11th and seeing the horrific actions on repeat for weeks on end Josh knew that he was going to enlist. At the age of 19, six years after September 11th, he enlisted and went to boot camp at Parris Island and then onto infantry training at Camp Geiger in North Carolina.

A year after his enlistment Josh was deployed to Fallujah, Iraq as an infantry assaultman. He was deployed again in 2010 to Marjah, Afghanistan as a part of Operation Moshtarak serving as the 1st assault squad leader. During his service Josh earned numerous awards including: the Combat Action Ribbon, Good Conduct Medal, Afghanistan Campaign Medal, Iraq Campaign Medal, Presidential Unit Citation, Sea Service Ribbon and more.

After his time with the Marines came to an end, Josh began his civilian life and quickly realized that the normal desk job wasn’t for him. He decided to give his other career aspiration a chance and began training in the Rappahannock Regional Criminal Justice Academy in 2012 to become a police officer. The diversity of everyday tasks, projects, and situations drew him to law enforcement. But the bigger impact that Josh has on his community and what makes him proud to be a police officer is the ability to have a positive impact on someone’s life.

Josh has worked tirelessly and passionately as a police officer. He was recently promoted to corporal at the Page County Sheriff’s Office. Over the years in his law enforcement career he has earned many specialization accomplishments including: Advanced Reid Interview and Interrogation, SWAT Basic, OC Instructor, Less Lethal Impact Munitions Instructor, Chemical Munitions Instructor, and many more.