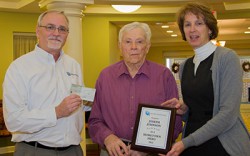 Mr. Johnson served in the United States Navy and was a 1st class Communications Technician. He attended the University of Chicago for Morse Code and Radio Communication Procedures prior to spending 7 and a half years in the Navy. He served in World War II and the Korean War. He was stationed in Guam and Bainbridge Island during his service.

He is most proud of his Unit Commendation Medal which he received for his work in the Asia-Pacific War. He received several other awards including the American Theatre Stripe and an Asiatic-Pacific Campaign Medal for supporting and working the Battle of Midway.

He lived in Cyprus, Venezuela, Colombia and El Salvador during his time in the Navy. He met his wife at a sledding party in 1950 before serving in World War II. They had 2 children born in Cyprus for which they choose from 4 different citizenships before swearing them in as American Citizens. After serving in the Navy, he worked for 1½ years as a Foreign Service Officer for the U.S. Department of the State in Washington D.C. where he retired.

Greg Dudley, Branch Partner – Orange, VA, had the honor of presenting Mr. Johnson with his personalized plaque and $500 check.