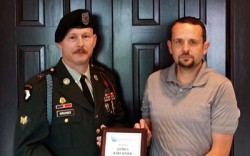 Mr. Kirchner entered Basic and AIT at Ft. Benning, GA in July of 1993. He graduated as 11 H/B Infantryman and his 1st Duty Station was Ft. Polk, LA where he was assigned to C Troop 1/2 A.C.R., from September 1993 to November 1996. Within that time, C Troop was a part of JRTC and they were sent to Haiti in April 1995 to September 1995 as U.N. Peace Keepers. In November 1996, he was moved to Camp Casey, South Korea then later was moved to Ft. Campbell, KY where he was Honorably Discharged (medical) in February 1998.

He returned to the Army in November of 2000, with orders for 101st Airborne, assigned to HHC 3rd of the 3327 Infantry Support Platoon, where he transported soldiers, MRE’s and ammunition. He then served in Kuwait / Iraq from March 2003 through February 2004 and was honorably discharged in August 2004.

Jason Inglish, Branch Partner – Cumberland, MD,  had the honor of presenting Mr. Kirchner with his personalized plaque and $500 check.