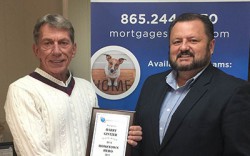 Harry Gintzer was born in Harrisburg, PA and graduated from Beford H.S. in Lambertville, MI in 1963. He enlisted in the Navy in 1965 and was assigned to flight training school in Pensacola, FL. During his Navy career and combat missions in the Vietnam conflict he flew a variety of aircraft including the C118/DC6, DC-9, and most memorably the OB10 attack plane as part of the famed Black Ponies squadron from 1971-1972. Capt. Gintzer flew over 162 combat missions in Vietnam. He received numerous medals including Air Strike Flight medal, 3 Navy commendations, Vietnam service medals, Presidential citations, the Vietnamese Air Cross along with 16 other medals. After his honorable discharge in 1997, he became a Jr ROTC instructor in Colorado Springs, CO. Capt Gintzer is the proud father of 3 daughters and makes his home in Jefferson City, TN.

Ken Phillips, Branch Partner at our Morristown, TN branch thanked him for his service and presented him with his plaque and check.