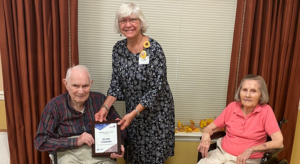 Veteran Glynn Coleman enlisted in the Air Force at the young age of 17. His skills and abilities quickly rose him through the ranks, and he found himself serving overseas in Paris, France during World War II. After returning from his service in Paris, Glynn continued his education and began his career while keeping all that he learned and experience with the Air Force in the back of his mind.

Glynn Coleman enlisted in the Air Force at a young age, and his understanding of electronics grabbed the higher-ranking officer’s attention. The Air Force sent him to Illinois, Wisconsin and Florida for trainings in order to enhance his capabilities and move forward in the branch in this specialization. Soon thereafter, Glynn earned a Corporal ranking and was transferred to Paris, France. He served overseas for nine months toward the end of World War II working on radio repair and radar technology. Away from the duties of the job, he enjoyed setting up movies for soldiers as a source of entertainment.

Glynn’s service in the Air Force ended after two years after he developed a severe case of pneumonia which left him unable to continue his service. After he returned to the states, Glynn pursued a college degree from Mary State College in Kentucky where he graduated with a bachelor’s degree in Industrial Arts.

After his graduation, Glynn left for Virginia to begin his job as an Industrial Arts Teacher at Orange County High School. He spent five years at the school, and he met his wife of now 70 years, Betty Coleman. Glynn later moved on to his next career opportunity with Virginia Metals where he would spend the next 13 years. In all his career choices, Glynn shared that his military experience was a crucial factor and key determinant as he selected his opportunities throughout his career.

Branch Manager Greg Dudley from our ALCOVA Orange branch was honored to present Glynn with his Hometown Hero award.