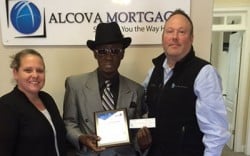 Mr. David Johnson, a Georgia resident was awarded the Hometown Hero award on behalf of ALCOVA Mortgage Kennesaw. David elected to go into the Army in 1967 and became active in 1968. Prior to going into the Army, he took the Air Force exam and passed, but the branch of Army was where he ended up serving our country. The day Mr. Johnson graduated basic training, he got married to his sweetheart and the love of his life. After completing AIT and basic training, Mr. Johnson was sent to Vilseck, Germany in which was 15 kilometers from the Czechoslovakian border. After moving his family here, his wife and child were not happy with the living arrangements as there was not a career opportunity for his wife to pursue in such a small town, therefore Mr. Johnson volunteered for a war zone and shortly afterwards went to war in Vietnam. He was in Vietnam for one tour where he served his country for the last part of his military career. While over in Vietnam, he was almost blown up by a 122 rocket and shortly afterwards Mr. Johnson was discharged from the Army in 1970 and considered 100% disabled due to his encounter with “Agent Orange” while serving his tour in Vietnam.

After serving his country, Mr. Johnson made one promise to himself and that was to own a piece of America one day. With the help of Branch Partner Michael Uzzell and his Loan Processor, Melanie Spruell, David worked with ALCOVA Mortgage and was able to finance and own the home of his dreams!