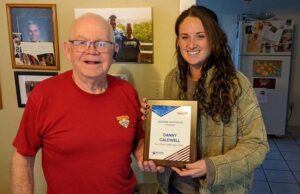 With aspirations to see more of the world, US Army Veteran Danny Caldwell began his journey in the military to become a more well-rounded and disciplined individual. Little did he know that his love for helping others would shine through to take him down the path he is on today.

Danny was a part of the 82nd Airborne serving as a paratrooper because “he was just crazy enough to do it.” No matter how many jumps he had, leaving the plane was always nerve-racking and intimidating. Regardless, he always found the willpower to take his two feet off the plane floors.

After leaving the Army, Danny started refereeing and umpiring local youth and high school sports. He takes pride being a part of his high school’s athletic hall of fame and knows just how much of an influence sports can have on one’s life. His love for sports, especially basketball, allowed him to passionately pursue his refereeing and umpiring path for 42 years, while also making a positive impact on others in his community. He mentored players as well as other referees. He takes pride in seeing those that he has worked with succeed. One of his many prideful accomplishments in the sports world is mentoring a basketball referee that now is a full time ACC referee that also works the NCAA basketball tournament.

Outside of his passion for sports, Danny is dedicated to working with and sponsoring individuals in a 12-step recovery program. He has worked with individuals in the program for over 40 years and hosts regular nightly meetings. He has helped hundreds of people reach their goals in the program and changed numerous lives through sponsorship and aid to beat addiction. Danny is immensely proud of every individual he has worked with and continues to support those that need help.