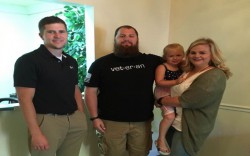 Chris joined the army in March of 2010 as a Cavalry Scout.  In July of 2010, he was stationed at Fort Riley, Kansas in the Unit 4/4 Cavalry Alpha Company. They deployed to Afghanistan in February of 2011.  Chris served three months before he was injured while on a mission in May of 2011.  He was shot in the head when his team was ambushed from all sides.  The bullet made a clean pass through his skull, from the front to the back.

He was Medevaced to Kandahar, Afghanistan where they did the first of many surgeries to repair the damage. Then he was transferred to Landstuhl, Germany.  He spent two days there before being transferred to Bethesda, Maryland for further medical care.  He gives credit to God for being here today as the bullet impact should have killed him.  He had to relearn everything after the accident.  How to walk, talk and live.  He was in rehabilitation until June of 2013 when he was honorably and medically retired.  He has been awarded the following honors:  Army Commendation Medal, Purple Heart, Army Award for Valor, National Defense Service Medal, Global War on Terrorism Service Medal, Army Service Ribbon, Overseas Service Ribbon, NATO Medal, and The Combat Action Badge.

Never forget the sacrifices of men like Chris and the price that has been paid in the past and continues to be paid each day for our freedom.