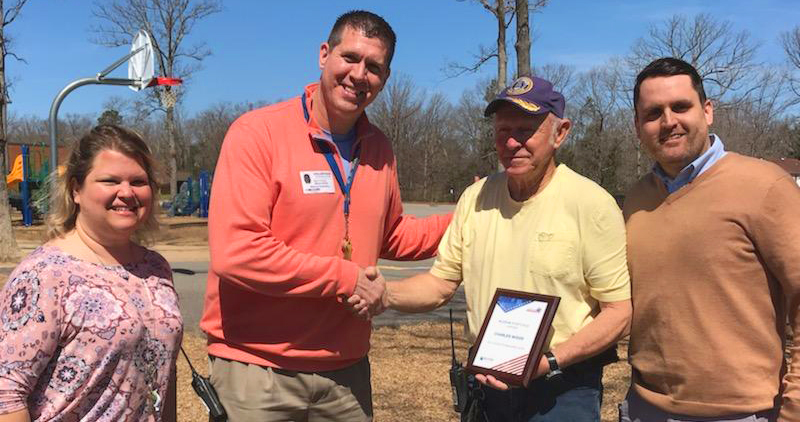 With a military career spanning four years in the Air Force as an E4 Senior Airman, Charles Wood served his country proudly in both the Philippines and Vietnam. While his older brother took up service in the Army, Charles decided to join the Air Force instead. His reason was he “didn’t want to lay in the mud and thought that flying up above it sounded like a better plan!” When he finished his military service, he resumed his job as a carpenter, the same work he was doing before he enlisted.

Now retired, Charles serves as a regular “Watch Dog” at JB Watkins Elementary School. The Watch Dog program is a public school volunteer program mainly for fathers and grandfathers. Volunteering at the school can include a variety of things including fixing things in need of repair, to walking kids from the office or clinic back to their classrooms, to helping set up for an assembly, to tying kids shoes in the hallway. Years ago, one of his granddaughters asked Charles to come to school and try being a Watch Dog for the day. He loved it so much that he has continued with it even though his grandkids have now graduated to higher grade levels. He rarely misses a day and is often there five days a week!

Branch Partner Ryan Charles from ALCOVA Mortgage is part of the Watch Dog program himself, and he can recall seeing Charles there every day that he has come in to volunteer. Ryan says, “Charles is legendary here at JB Watkins and never asks for any spotlight, attention, or recognition.” Even though the school uses an online sign-up sheet for the volunteers to pick their days, Charles never uses it. He simply shows up every day, and Ryan says, “He just makes JB Watkins a better place!”

Ryan partnered up with Assistant Principal Shawn Ondrish to surprise Charles as a Hometown Hero. They gathered the kids together, and Ryan asked the group to raise their hand if they knew Mr. Wood. Every single hand shot up in the air! Ryan then talked about Charles’ dedication to the kids and the Watch Dog program and presented him with his Hometown Hero award amidst cheers of “Mr. Wood, Mr. Wood, Mr. Wood!” from everyone.

“I’m so grateful to have the opportunity to honor such a deserving man,” says Ryan. It was a day that I, and I’m sure, Mr. Wood, will never forget!”