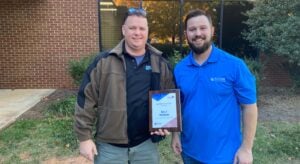 In search of brotherhood and comradery, Veteran Billy Mumaw joined the Marines in 1991 and found just what he was looking for. Billy started his training at Camp Lejeune, a 156,000-acre camp in North Carolina with eleven miles of beach, three training facilities and eighty live fire ranges. Camp Lejeune fosters the making and training of combat-ready units of warfighters for missions abroad. His time at the camp laid the foundation for his service and fulfilled his desire for brotherhood under a larger purpose. As a part of Alpha Company 1st Battalion, 6th Marines Billy worked his way up to Corporal status. In 1995 he left the Marines, which opened up a new chapter and new opportunities for him as a civilian.

At the conclusion of his military career, Billy joined the York, SC Police Department. It was a perfect fit as it gave him a new brotherhood while also serving the community. He had a long and successful career with the York Police Department, and he immensely enjoyed the team atmosphere with his fellow officers. Billy earned Officer of the Year in 2004, and with all his dedication and hard work, Billy earned the position of Lieutenant over the detective’s office. After 22 years, Billy retired from the police department in December 2020.

Outside of his time in the Marine Corps and the York Police Department, Billy loves doing what he can to help those around him. When he was still working with the Police Department, Billy utilized a vacant office to start a clothing and toy drive for underprivileged children. In 2020, his efforts helped make a special and memorable Christmas for ten families. The toy and clothing drive is still helping families even after Billy’s retirement thanks to fellow officers who have taken over the mission. He also teaches lifesaving skills and safety defense classes and is a part of the York Masonic Lodge and York County Crescent Shrine Club. In his personal time, Billy enjoys the simple things in life. Kicking back in his man cave or enjoying a cigar with friends are some of his favorite post-retirement activities.