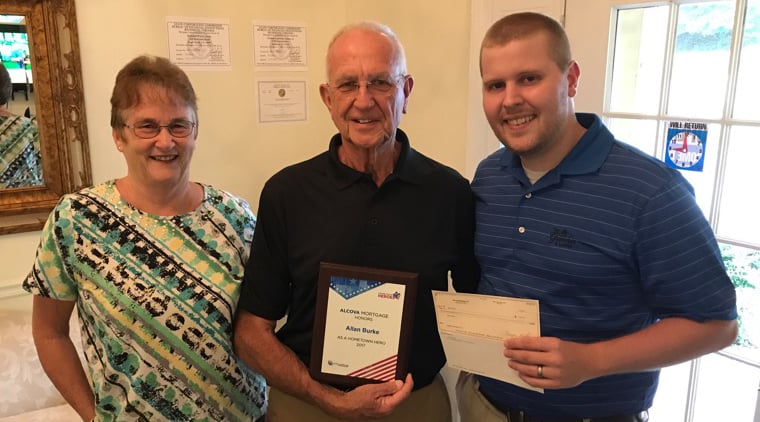 Joining in 1965 Allan Burke served in Army Aviation for a total of 20 years. Completing his training at both Fort Knox and Fort Campbell, he acquired the advanced skills to fly multiple types of helicopter aircraft including OH58: Iroquois, UH1: Huey, and UH60: Blackhawk. After a brief break in service, Allan rejoined and went on active duty at Fort Rucker in Alabama. He also served on the Virginia and North Carolina National Guard with duties including involvement with marijuana eradication, hurricane disaster relief and assistance with special forces. Allan retired as Warrant Officer 3 with plans to continue to serve his country and community.

Aspiring to be a state trooper, Allan joined the Virginia State Police in 1972. “I had always admired the department, and it was a way for me to continue to help people,” says Allan. He served as an on-the-road trooper, a narcotics agent, and aviator. For 6 years, he flew the medical evacuation helicopter to transport sick and injured people to the hospital and to search for lost individuals. In the mid-1970s, Allan was named Young Law Enforcement Officer of the Year. He also received the Red Cross Meritorious Award, the highest honor to give to a civilian, and was honored with the Publishers Award from the Virginia State Crime Commission magazine for administering and assisting youth in a life-threatening accident. Allan also holds the record for finding the largest amount of marijuana plants in State Police History. After his tenure with the Virginia State Police Department concluded, Allan was elected as the Clerk of Montgomery County Circuit Court, and he served in that role for the next 16 years.

In his local community, Allan enjoys serving through a variety of different avenues. He has served as the President of his local Lions Club for the past 10 years, and in 2017, he was honored to receive the Melvin Jones Award, the highest award given in Lionism for service to others. Allan is also very active with Gideons International, taking time to speak to various churches on the Gideon stewardship report. Allan also enjoys volunteering as an Usher and Security Team member at Auburn Baptist Church. He is currently employed by the Hokie Flying Club as a flight instructor for beginning and advanced students. He won Instructor of the Year in 2014 and 2016 through the Aircraft Owners and Pilots Association.

In all chapters of his life, Allan Burke consistently demonstrates his desire to help people and serve his community. For his service to his country and his heart for others, ALCOVA Mortgage is honored to name Allan Burke as one of our Hometown Heroes! On August 1, 2017, Brandon Nicely, Wallace Andrus and their team from the ALCOVA Branch in Blacksburg, VA were honored to presented Allan with his Hometown Hero award.