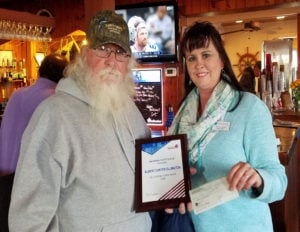 ALCOVA Branch Partner Tanya Gills says that she has yet to go anywhere in the Outer Banks area to find anyone who does not know “Ace”. Albert “Ace” Carter Ellington III, our November honoree for Hometown Heroes, served in the Marines as a Sergeant for ten years and was stationed in the Philippines and Vietnam. Like any serviceman during wartime, there were plenty of horrors to witness but when asked about stories, Ace quickly responds with fond memories of bringing movies and cartoons to the Vietnamese people, especially the children. He even has a special memory of meeting and conversing with the famous jazz musician Duke Ellington while stationed in the Philippines.

During his time in service, Ace also had the honor to be selected to train to work in the local embassy. When asked about his biggest accomplishment, he does not respond with medals or awards, but humbly states, “just staying alive.” He was proud to serve as it was his duty. Ace did try later in his life to go back into the military but due to his age at that time, he was unable to do so.

Ace also loved becoming a lifetime member of the Freemasons, and he is immensely proud of his family history in the organization. Ace’s father joined the Freemasons at the age of 20, held office of Master during the 200th anniversary, and served until the age of 78 before passing away due to Lou Gehrig’s disease. Ace was in line to become Master just like his father before he left to start his military career.

After his time in service, Ace relocated to Richmond, VA and became a Deputy Sherriff.  After retiring from the Sherriff’s department, he moved to the Outer Banks to be with his children. He lived and rented the same house there for eighteen years. His favorite pastimes were to sit outside his home, fly his POW/MIA and Marine Corp. flags, and frequent local restaurants and hang-outs in his area. Being legally blind, Ace especially enjoyed spending his time with his friends and visitors in the area.

On February 6, 2016, Ace’s house caught fire in the middle of the night due to electrical problems. Ace escaped without injury, but he tragically lost everything. Members in the local community quickly jumped in to help. Restaurants held fundraisers, and thrift stores donated items. An online fundraiser was also set up to raise money for Ace on www.youcaring.com. With everyone lending their help, Ace had the funds to move in to an apartment where he now resides. Overwhelmed by the efforts of his friends in the community, Ace knows he will never be without someone assisting him.

ALCOVA Mortgage is honored to reward Albert “Ace” Carter Ellington III with its Hometown Heroes award. Ace is immensely grateful to receive this award, and he plans on using the money to replace some of these items he lost in the fire.