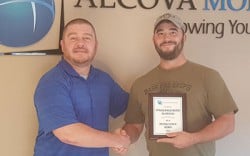 William “Billy” Joseph Almond grew up in LaVale, MD – graduating from Allegany High School (Class of ’99). After high school, Mr. Almond attended Allegany College of Maryland where he studied Criminal Justice and Political Science. In August of 2003, he made the decision to enlist in the United States Army. After completing his basic training at Fort Knox, he was stationed out of Fort Hood, Texas with A-Troop 1st Squadron 10th US Calvary Regiment 4th Infantry Division. During his service, he served two tours in Iraq (2003-2006).

Mr. Almond earned several awards including three Commendation Medals and a Purple Heart earned in Iraq when he was hit by shrapnel from an exploding IED. After an honorable discharge from the Army, he resumed his studies in Political Science and graduated from Frostburg State University in 2009.

Currently, Mr. Almond continues to serve his country as a Federal Correctional Officer at FCI Cumberland, MD. He lives in Ridgeley, WV with his fiancé Jennifer Pyles and their golden retriever, Alcide.